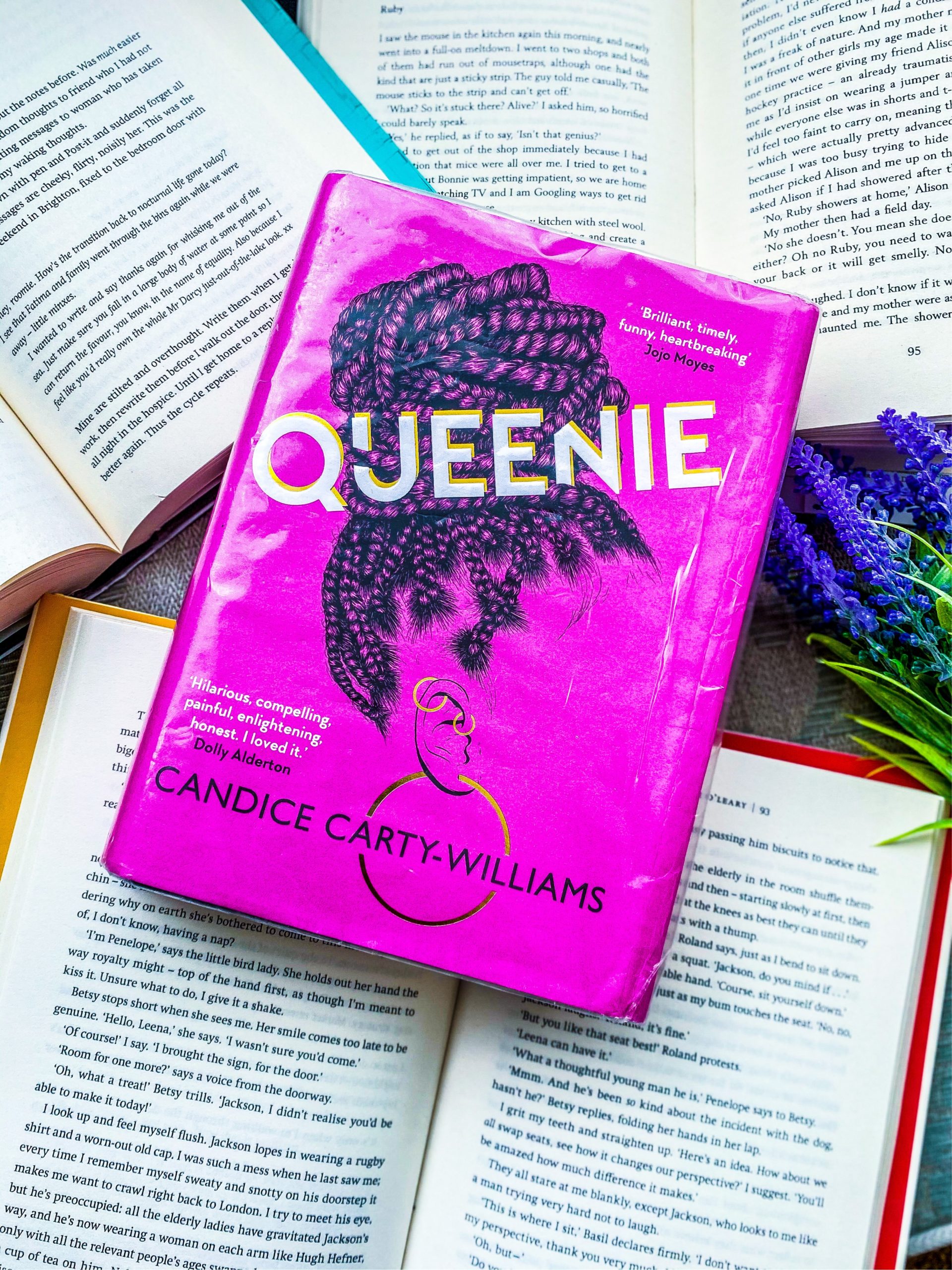 I’ve mulled over Queenie for a long time. There are so many nuances to the issues in the book and I’m not quite sure where to begin, so I’ll start with how I felt about a woman who’s dealing with a lack of self-confidence and self-esteem due to childhood trauma. I felt sad and sorry for Queenie.

25-year-old Queenie works for a national newspaper and is undergoing a hard time with her breakup from her boyfriend, Tom. Unable to read between the lines that her relationship is over, it appears her behaviour is uncharacteristic as she placidly gives into having wholly unsatisfying and, at one point, toxic encounters that involve violent sex with men she barely knows. She numbs herself into not facing the pain of her present and past. With her work suffering and her living situation being less than ideal, the only respite in her life seems to be her friends and family who eventually help her identify that she needs to seek help leading to a series of events that result in her reconciling with harsh truths about herself.

I’m conflicted between loving and feeling disappointed about Queenie as a character and never felt more upset for reading about a disempowered woman. But then I contextualise – in fact, it’s unsurprising she’s so disempowered. Whichever way she turns, Queenie faces racism, both subtle and overt, and therefore empowerment and self-confidence fall to the wayside as the people who are meant to hold her best interests at heart turn out to be the complete opposite. Tom’s refusal to accept responsibility for his uncle’s appalling racism and stand up for Queenie are markers of a force in her life that has only been seeking to undermine her into submission. The behaviour of the medical professionals she encounters are another example of micro-aggressions faced by Black women serving as a stark reminder that racism is not only personal but how easily the personal is manifested in the professional and becomes institutional.

Among the best characters in the book are Queenie’s friend, Kyazike. Kyazike is hilarious, real but incredibly grounded and her dating life makes for some incredibly comical reading. In fact, I’d love to read a book about Kyazike and her love life. Additionally, Queenie’s family give us an insight into why she struggles to straddle between two cultures as well as the complex family dynamics. Her relationship with her mother is strained and unfortunately has an impact on her choice of men.

There were two places where I felt the book could have done better. Firstly was the representation of Adi, a Pakistani man Queenie knows, as Muslim and the book quite openly states that Black women are considered forbidden fruit to Muslim men. This is grossly inaccurate on many levels as it alienates Black Muslim women as well as horribly misrepresenting Muslim men as Pakistani men who have racist, sexual fetishes. For a book that features racism, I was somewhat perturbed at this massive oversight throughout the entire publishing process.
Secondly, the handling of Cassandra at the end needed to be more brutal. She’s a terrible friend who should have been cut off entirely due to her poor behaviour towards Queenie throughout, not just during their fight. There is nothing of value that she could possibly add to Queenie’s life and is completely undeserving.

Set in the vivid landscape of urban South London, the story is supposed to hold parallels with Bridget Jones, but this couldn’t be further from the truth not least because Bridget Jones’ Diary is quite obviously racist. With some profound issues brought to the fore, the cultural perceptions around therapy and mental health as well the sexual fetishisation of Black women, Queenie lays bare the issues of being a Black woman in today’s world where, quite disturbingly, the struggle to merely exist is still very, very real.